Atlantoaxial rotatory subluxation (AARS) is the loss of normal alignment and stability of the first (atlas) and second (axis) cervical vertebrae with respect to each other. We describe the clinical challenges of managing a 10-year-old boy who presented with repetitive episodes of torticollis. Open-mouth odontoid radiograph and computed tomographic (CT) scan gave a diagnosis in ARRS, based on its characteristic imaging findings. The child was admitted multiple times for continuous halter traction in the first 6 months after symptom onset. He also experienced a temporary complication from an overcorrection with correcting neck bracing. Seven months after symptom onset, this case was discussed by a multidisciplinary spine team and referred to chiropractic clinic. Despite persistent radiographic evidence of atlantoaxial instability, after 5 months of chiropractic treatment, the child was asymptomatic with nearly full range of neck movement. He also weaned off acetaminophen he had been taking over the past year. Incidentally, bilateral gynecomastia was discovered at the surveillance after treatment. The incidental finding of innocent gynecomastia, even if common in preteen boys, brings up the topic of acetaminophen’s effects on the regulation of sex hormones that was previously overlooked. 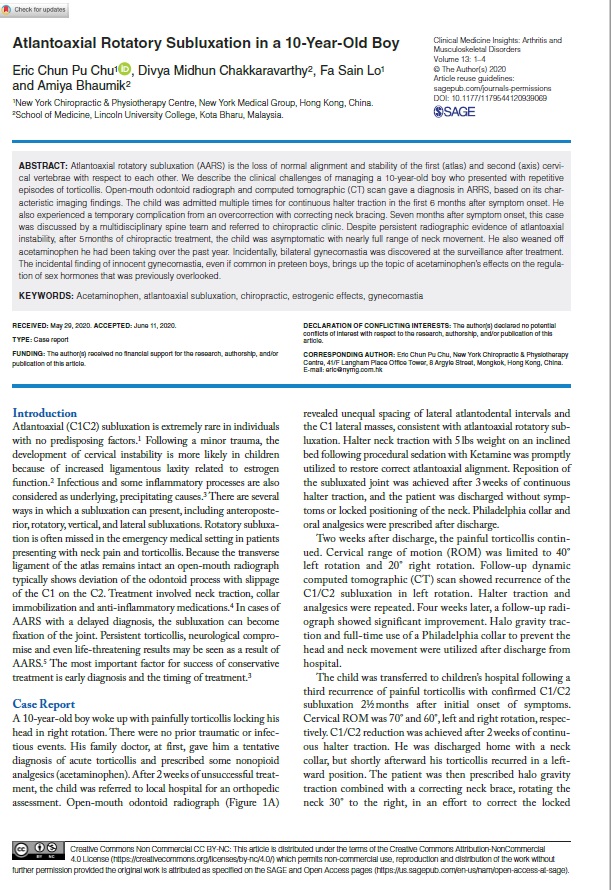