August 28, 2020 To Whom It May Concern: We are writing to you as it has come to our attention that multiple articles published by your organization on the social media involving the field of chiropractic is inaccurate, biased and misleading. The code of conduct for an editor stipulates that the press must take care not to publish misleading or distorted information. Significant inaccuracy, misleading statement or distortion must be corrected promptly and with due prominence – and where appreciate, an apology published. As a prominent social media news outlet that prides itself in upholding the highest standard in providing its readers accurate and up-to-date health-related topics, we trust that you will take action to correct the biased and misleading information about chiropractic in the articles by the following links: https://medicalinspire.com/web/posts/38031 with the headline: 【是真是假】脊醫因未經嚴格科學測試而實踐療法，專業資格受到質疑更被指「偽科學」。 https://medicalinspire.com/web/posts/46031 with the headline: 【明辨是非】另類療法是甚麼？脊醫不是香港醫委會註冊專科。 As the editor stated, the Chiropractors Council in Hong Kong regulates and governs the practice of chiropractic in Hong Kong. Its code of practice clearly states the scope of practice of chiropractic as “a discipline of the scientific healing arts concerned with the pathogenesis, diagnostics, therapeutics and prophylaxis of functional disturbances, pathomechanical states, pain syndromes and neurophysiological effects related to the statics and dynamics of the locomotor system, especially of the spine and pelvis.” According to the World Health Organization’s (WHO) definition, chiropractic is “a health care profession concerned with the diagnosis, treatment and prevention of disorders of the neuromusculoskeletal system, and the effects of these disorders on general health”. The efficacy of chiropractic in the neuromusculoskeletal system has been well studied and established in literature. The above stated articles clearly try to paint a faulty, biased picture of the practice of chiropractic, and mislead the readers. Indeed, chiropractic being a distinct healthcare system, Chiropractors are primary healthcare professionals registered and licensed in Hong Kong under the Chiropractors Registration Ordinance, Chapter 428, Laws of Hong Kong. Chiropractic, as with traditional Chinese medicine and dentistry, are not part of orthodox medicine. All four of these professions exist as separate entities with their own jurisdictions. It makes obvious and intuitive sense that orthodox medicine is licensed under the Medical Council; and while the other three professions are not part of orthodox medicine, are not licensed under the Medical Council.  The author has somehow failed to recognize this simple fact. Undermining the chiropractic profession because it is a distinct healthcare system and not part of orthodox medicine, is indeed unprofessional and absolutely biased, and irresponsible. The Chiropractic Doctors’ Association of Hong Kong thereby requests Medical Inspire to promptly amend its biased content and issue an apology accordingly. Regards, The Chiropractic Doctors’ Association of Hong Kong ​ 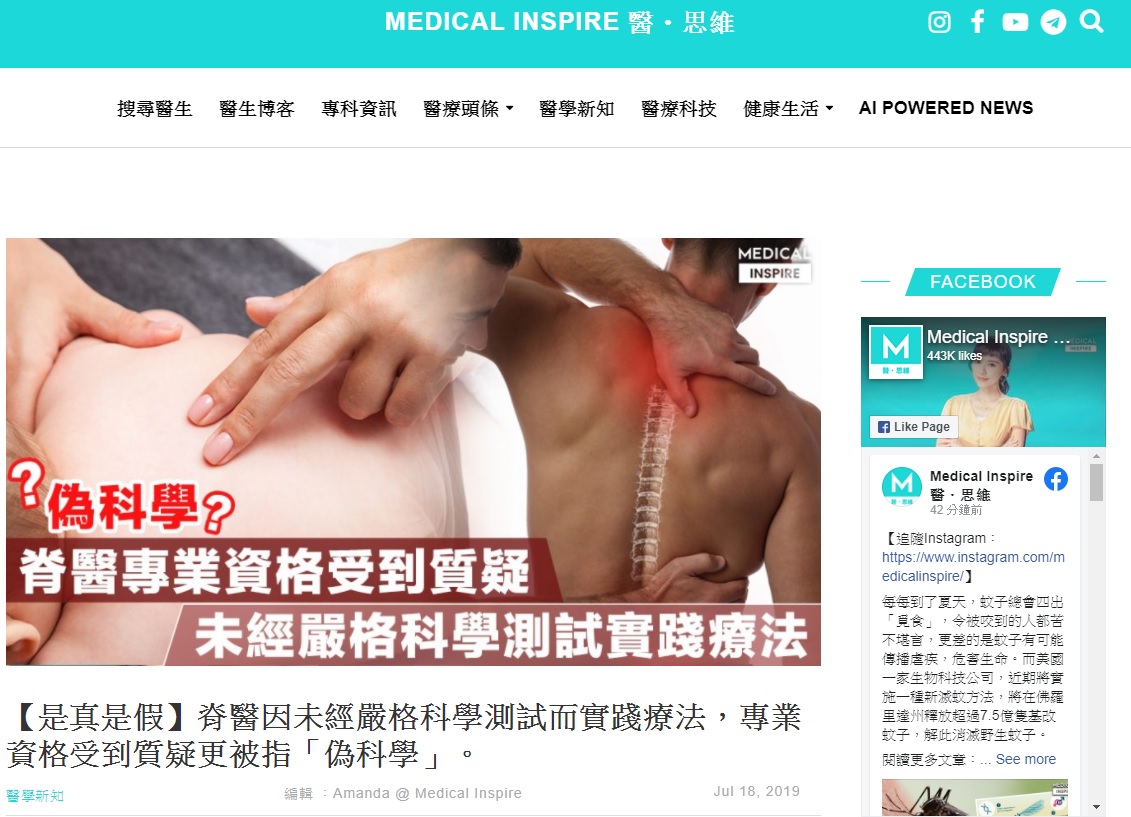